The game is a 2D text-adventure game named “Murder in old Ashtown”. It was created in 8 weeks by a team of 11 people using the ALAN-engine, Maya and Photoshop.

The game is about a murder mystery and the quest to find the murderer.

The first game at The Game Assembly

This project was the first game I made at The Game Assembly, and this was the first time making a text-adventure. I had not played any text-adventures while I was growing up so the first thing I had to do was to play some of the previous ones from previous students. Finding out that the interaction with the game was to be purely by text-commands narrowed down the player interaction with the game.

When the interaction were limited we really took out the boundries when it came to the design of the game world. We wanted to create a game with branching questlines and multiple endings, something that had not been done before by previous students. We also wanted to have a day/night-cycle with characters who only could be found at night. 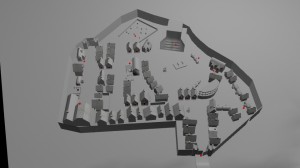 We designed our gameplay around the 10 characters in the town. Every character has either an alibi or an accusation against one of the other characters. The player would have to talk to a character who may give the information freely or, by choosing some of the dialogue-choices, be forced to do a quest to obtain the information. After each alibi the crowd of suspects shrinks and in the end the player will find out who is the murderer. An ending that depending in the players choices could end in three different ways. 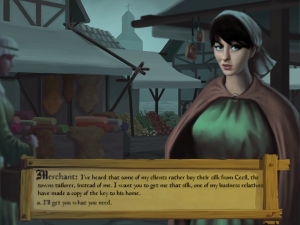 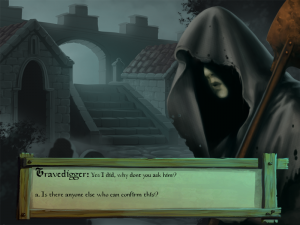